Archaeology of the House. Site. Object. Context. Interpreting a Collection: A study of the Life and Work of Robert Louis Blatherwick (1920-1993) 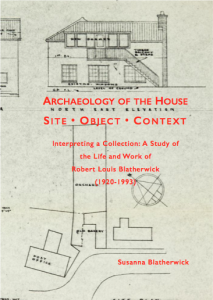 I completed post-graduate research in which I made a photographic and written record of the previously unrecorded ceramic and other art works of my late father. He looked after Winchcombe Pottery making pots for Michael Cardew, and then for Bernard Leach at St Ives during the Second World War. But much of this time was unrecorded and he appeared to have slipped off the records. These experiences had a major influence on his life, work, and on our lifestyle as a family, with him as an art school lecturer before becoming a self-employed ceramicist, with my mother running a business from home.

For my research I utilised historical archives and family artefacts in order to contextualise the development of his work in ceramics. My thesis used the house as a structure for the chronology of his work / life and included reflective, personal and contextual forms of writing. This was for a Master of Philosophy by Thesis at Manchester Institute for Research in Art and Design (MIRIAD), Manchester Metropolitan University, awarded in 2014.

The house was an important part of the narrative as it had been converted from a redundant bakery by my parents and grandparents during the 1950s, and they had done much of the work and created its style. It is now available for long or short term stays and can be booked via Airbnb: Stylish & spacious ceramic artist’s house & garden