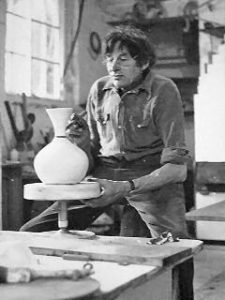 Bob was born in Lincoln. He studied at Lincoln School of Art, received a scholarship and went to Wedgwood Pottery in Stoke-on-Trent. He managed Winchcombe Pottery for Michael Cardew for a period during the war, then went to St Ives where he made pots for Bernard Leach. He returned to Lincoln School of Art, teaching many people who became well known including Gordon Baldwin, before resigning from his post in 1967. During this period he made stoneware and earthenware work.

He set up his own pottery with a gallery in Reepham, just outside Lincoln, influenced by the ideals of Winchcombe and St Ives. He decided to focus on developing earthenware as he felt that its potential was unexplored, and everyone was doing stoneware. He created individually designed slab or thrown pieces, including domestic ware, jewellery, sculptural forms and tiles. His work went all over the world, with commissions from Japan and Canada. A coffee pot has recently been found in Australia! His designs, bodies and glazes were constantly under review, as he explored the possibilities with slipware and earthenware glazes. Work was often unmarked, as he believed a pot should speak for itself. He was an early member of The Craftsmen Potters’ Association.

The business was managed and run by his wife Marjorie, a creative organiser and, as she requested to be put on her gravestone, a ‘Girl Friday’. They had three children who were brought up on the generated income, along with the sale of apples and honey from the garden. He continued potting, sculpting and painting until his death.

I spent a few years gathering material relating to his life and work, which is written up in a thesis. I received guidance and advice from experts at Manchester Metropolitan University. My thesis is called ‘Archeology of the House Site . Object . Context – Interpreting a Collection: A Study of the Life and Work of Robert Louis Blatherwick (1920-1993)’. I hope to get this published.

Should you wish to contact me with a query relating to my father’s work I am happy to respond. 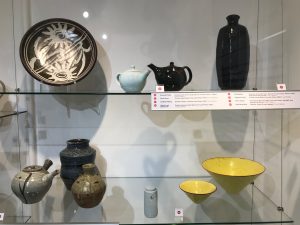 The tall black Tenmoku glazed pot on the right of this photograph, made by Robert in the 1950s,  was exhibited in the Leach Pottery’s Century of Connections exhibition in St Ives.